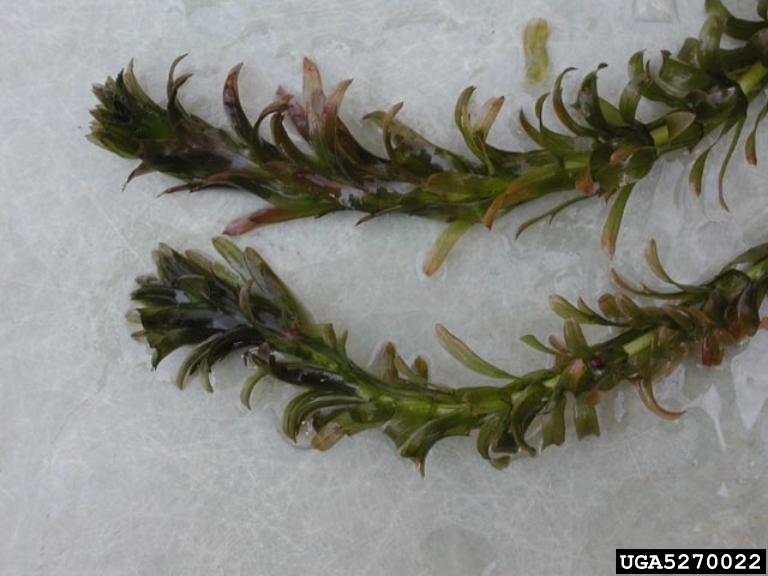 Brazilian elodea is a submerged herb that can be either rooted or free-floating. Stems are erect, cylindrical, simple or branched, and grow until they reach the surface of the water, where they from dense mats. Specialized nodal regions, called double nodes, occur at intervals of 6 to 12 nodes along a shoot. Double nodes, consisting of 2 single nodes separated by greatly a shortened internode, produce lateral buds, branches and fine, unbranched, adventitious roots.

Brazilian elodea leaves are 0.4-1.2 in. (1-3 cm) long, up to 0.2 in. (5 mm) broad. They are linear, with minutely-toothed margins. The undersides of the leaf midribs are smooth. The lowest leaves are opposite or in whorls of 3, while the middle and upper leaves are in whorls of 4 to 8.

Flowers are, dioecious, white, 0.7-1 in. (18-25 mm) long, with three petals. Flowers float on or rise above the waterâ€™s surface on thread-like hypanthiums produced from apical double notes. Only staminate (male) flowers are known to occur in North America.

Pistilate (female) flowers and/or seeds are not known to occur in North America. In the absence of fruit/seed production, all reproduction is asexual by fragmentation.

razilian Elodea (also called Brazilian Waterweed or Brazilian egeria) is a submersed member of the Hydrocharitaceae (Frogâ€™s-bit) family. It forms dense surface mats which can restrict water flow, trap sediments, and interfere with boating and recreations. Mats can become 6-15 feet. (1.8-4.6 m) deep, blocking light penetration, outcompeting other native aquatic plants and degrading habitat for fish and waterfowl. Plants die back in fall or when water temperatures rise above 86Âº F (30Âº C), and overwinter in a dormant, but evergreen state underwater.

Brazilian elodea is a submersed, freshwater perennial herb, generally rooted or floating. It is found in both still and flowing waters, in lakes, ponds, pools, ditches, and quiet streams. It tends to form dense monospecific stands that can cover hundreds of acres and can persist until senescence in the fall.

Brazilian elodea is native to South America and was introduced to North America by the aquarium trade. It has commonly been used in aquaria and fish ponds as an â€œoxygenatorâ€ plant. It has been sold under several names including oxygenating plant, elodea, and Anacharis. Brazilian elodea is often introduced to waterbodies by careless disposal of aquarium contents or via transport on infested boats that enter uninfested waters. It is highly invasive and can easily establish in lakes and ponds, often covering several acres. It is now widespread in North America, having been recorded in British Columbia, Canada, Puerto Rico, and most of the U.S. except Arizona and the upper Midwestern states. It is listed as a noxious weed in AL, CT, ME, MA, OR, SC, VT, WA.

Removing and destroying stem fragments from recreational equipment such as boat propellers, docking lines and fishing gear can help prevent the spread of Brazilian Elodea and other invasive aquatic plants such as Hydrilla and Eurasian Watermilfoil.

Because Brazilian Elodea spreads readily through fragmentation, mechanical controls such as cutting, harvesting and underwater rototilling should be used only when the extent of the infestation is such that all available niches have been filled. Using mechanical controls while the plant is still invading will tend to enhance its rate of spread. Harvesting can be used to remove surfacing mats to create open areas for temporary recreational use; however, harvesters can produce thousands of fragments that can expand the population.

Light Barrier: Localized control in small areas (e.g. swimming areas and around docks) can be achieved by covering the sediment with an opaque fabric (benthic barrier) with blocks light from the plants. Large infestations (beyond one acre) are often impractical and are generally cost prohibitive.

Water Level: Where water levels can be controlled (e.g. irrigation canals and reservoirs), lowering of the water level over winter can effectively be used in areas where climates are cold enough to freeze sediments and kill plants.

Stocking of triploid (sterile) grass carp has been used for control in some cases. Brazilian Elodea is highly palatable and older carp will eat it in preference to other plants. However, grass carp often remove the entire submersed aquatic community and should only be used in systems where total removal of all submerged vegetation is acceptable. Grass carp are also not suitable for use in waterbodies where inlets and outlets cannot be screened. Extra care and consideration should be taken before introducing grass carp to any waterbody, especially in those that provide important habitat for waterfowl and/or anadromous fish species.