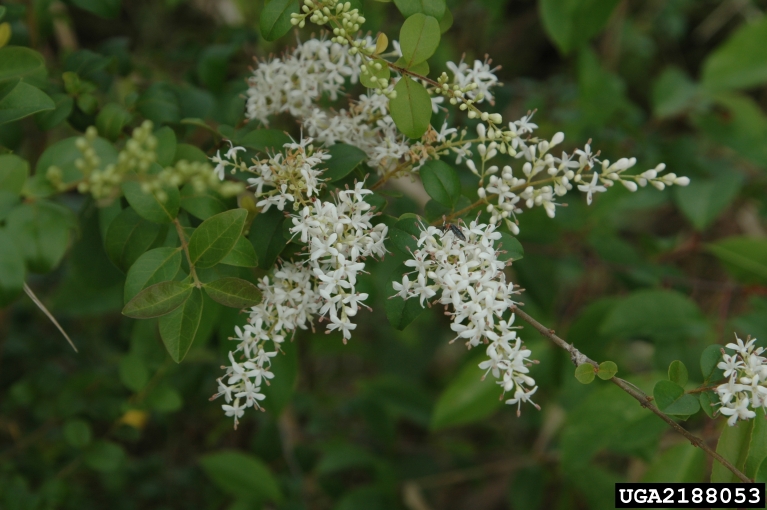 Privet bark is whitish-tan to gray in color and relatively smooth in texture with raised, light-colored lenticles (corky dots).

Slender twigs are straight, rounded or four-angled below the nodes, and gray-green in color. Long, leafy branches project out at near right angles. Young branches are minutely hairy. Leaf scars are semicircular with one bundle scar. Terminal buds are present.

Semi-evergreen to evergreen, opposite leaves are elliptic to ovate in shape with a rounded tip often minutely indented and 4-5 pairs of indistinct veins. Leaves are 0.8 to 1.6 inches (2-4 cm) long, 0.4 to 1.2 inches (1-3 cm) wide, lustrous, smooth, leathery and thick, with a glossy cuticle on upper surface. Underneath is pale green with hairy midvein. Petioles are very short.

Abundant, terminal and upper axillary clusters on short branches form panicles of white flowers in June. Corolla is a four-lobed, tube 0.06 to 0.1 inch (1.5 to 2 mm) long and equal or shorter than the lobes, with stamens extending from the corolla on Chinese privet (rather than staying within the corolla as with European privet). Fragrant.

The blue-black, berrylike fruits contain 1-4 seeds and are borne in terminal clusters. Fruits are round to ovoid and are 0.25 inch (6-8 mm) long. The fruit clusters ripen during September and October and persist through the winter. Mature specimens can produce hundreds of fruit.

Chinese privet, in the Oleaceae or Olive Family, is a perennial shrub that readily grows from seed or from root and stump sprouts and is the most widely occurring invasive Ligustrum species. Privet escapes cultivation by movement of seed, which is eaten and subsequently transported by wildlife, particularly birds. The seeds are reported to have a low germination rate: 5%-27% in two tests.

This privet is native to China and was introduced in the early to mid-1800's. An ornamental landscape plant, it has been cultivated since ancient times and developed into several horticultural varieties. Other states where invasive: AL, AR, FL, GA, KY, LA, MD, MS, NC, OH, OK, SC, TX.

Mowing/Cutting: This method is appropriate for small initial populations or environmentally sensitive areas where herbicides cannot be used. Repeated mowing or cutting will control the spread of privet, but will not eradicate it. Stems should be cut at least once per growing season as close to ground level as possible.

Hand Pulling: Privet is effectively controlled by manual removal of young seedlings. Plants should be pulled as soon as they are large enough to grasp but before they produce seeds. Seedlings are best pulled after a rain when the soil is loose. Larger stems, up to 6 cm (2.5 in), can be removed using a Weed Wrench or similar uprooting tools. The entire root must be removed since broken fragments may resprout.

This method should be considered for large thickets of privet where risk to non-target species is minimal. Air temperature should be above 65Â°F to ensure absorption of herbicides. The ideal time to treat is in late fall or early spring when many native species are dormant.

Glyphosate: Apply a 2% solution of glyphosate and water plus a 0.5% non-ionic surfactant to thoroughly wet all leaves. Use a low pressure and coarse spray pattern to reduce spray-drift damage to non-target species. Glyphosate is a nonselective systemic herbicide that may kill non-target partially-sprayed plants.

Triclopyr: Apply a 2% solution of triclopyr and water plus a 0.5% non-ionic surfactant, to thoroughly wet all leaves. Use a low pressure and coarse spray pattern to reduce spray-drift damage to non-target species. Triclopyr is a selective herbicide for broadleaf species. In areas where desirable grasses are growing under or around privet triclopyr can be used without non-target damage.

This control method should be considered when treating individual bushes or where the presence of desirable species preclude foliar application. This treatment is effective as long as the ground is not frozen.

Glyphosate: Horizontally cut privet stems at or near ground level. Immediately apply a 25% solution of glyphosate and water to the cut stump making sure to cover the entire surface.

Triclopyr: Horizontally cut privet stems at or near ground level. Immediately apply a 25% solution of triclopyr and water to the cut stump making sure the entire surface is covered.

This method is effective throughout the year as long as the ground is not frozen. Apply a mixture of 25% triclopyr and 75% horticultural oil to the
basal parts of the shrub to a height of 30-38 cm (12-15 in) from the ground. Thorough wetting is necessary for good control; spray until run-off is noticeable at the ground line.

Chinese Privet is listed on the USFS and Exotic Pest Plant Council invasive plant list. The problem with privet is that it forms dense thickets in bottomland forests, fencerows, rights-of-way and forest edges which may shade out desirable plant seedlings and compete for plant resources resulting in reduced growth of desirable vegetation. Privet stands that exist in planted pine plantations can explode with new growth after thinning operations creating future challenges.Â As a result, it is best to control these Privet stands before tree harvest.Â Privet colonizes by root-sprouting and abundant seed production. Â

Low-volume basal applications are ideal for lower densityÂ infestations where selectivity is key and accessibility is possible. Basal applications allow targeted control of undesirable privet species. Privet stems should be 6 inches or less in basal diameter. Applications can be made year round as long as the bark is not wet.

Apply a mixture of 20% - 25% GarlonÂ® 4 Ultra in basal oil
For ease of use, PathfinderÂ® II is also available as a ready-to-use mixture

Results show that aerial applications of Accord Concentrate for control of Chinese privet beneath dormant hardwood and mixed pine stands provide effective control. Three surfactants that have proven effective at controlling privet without harming hardwood and pine in aerial applications are TA-35 from Brewer International, EntrÃ©e from Aqumix, and Entrxx from Precision Labs.