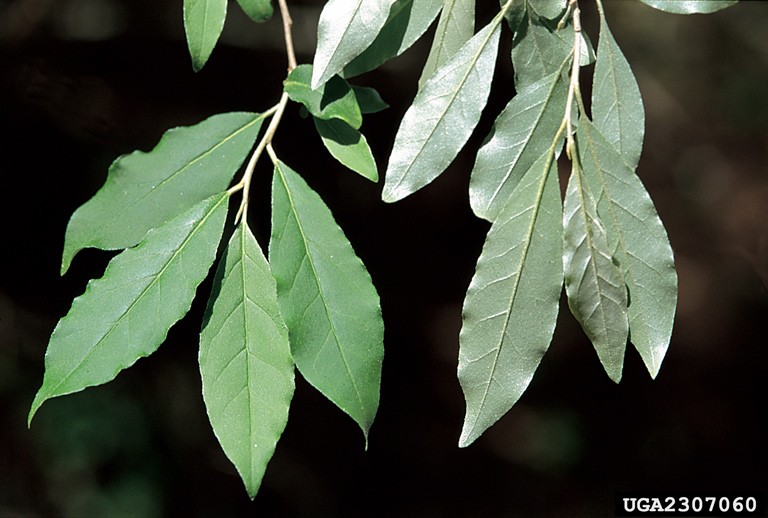 Autumn olive grows to a height of 20 feet (6 m). Its growth habit is bushy with a spreading crown.

Deciduous leaves are alternate, short-petioled, elliptic to ovate, and oblong. They are glabrous, dark green above, conspicuously silvery beneath.

The silvery or golden brown twigs often have prominent spines.

Fruits are abundant, juicy, round drupes up to 0.4 inch (1 cm) in length. Silvery fruit turns to red as it matures and is speckled with brown to silvery scales. Matures September-October.

Elaeagnus spp. are among the few non-legumes that fix nitrogen in the soil by means of bacterial root nodes. Plants flower and develop fruits annually after reaching three years of age. An individual can produce up to 3.6 kg (8 lbs) of fruit that are consumed and spread by birds and small mammals.

Autumn olive grows well in disturbed areas, open fields, margins of forests, roadsides, and clearings. Being tolerant of drought, it does not grow well in wet sites. It is intolerant of shade and will not invade areas of dense forest. Because the fruits are eaten by a variety of wildlife, the seeds may be distributed into forest openings or open woodlands.

Autumn olive was introduced into the United States in 1830 from China and Japan. It has been actively promoted by state and federal agencies for shelter belts, erosion control, strip mine reclamation, wildlife habitat, and was widely marketed as an ornamental. The shrub has now become naturalized in suitable habitats scattered throughout the eastern and Midwestern U.S.

Cutting: Cut trees at ground level with power or manual saws. Cutting is most effective when trees have begun to flower to prevent seed production. Because autumn olive spreads by suckering, resprouts are common after treatment. Cutting is an initial control measure, and success will require either an herbicidal control or repeated cutting of resprouts.

Girdling: Use this method on large trees where the use of herbicides is not practical. Using a hand-axe, make a cut through the bark encircling the base of the tree, approximately 15 cm (6 in) above the ground. Be sure that the cut goes well into or below the cambium layer. This method will kill the top of the tree but resprouts are common, and may require follow-up treatments for several years until roots are exhausted.

Hand Pulling: Autumn olive is effectively controlled by manual removal of young seedlings. Plants should be pulled as soon as they are large enough to grasp, but before they produce seeds. Seedlings are best pulled after a rain when the soil is loose. The entire root must be removed since broken fragments may resprout.

This method should be considered for large thickets of autumn olive seedlings where risk to non-target species is minimal. Air temperature should be above 65Â°F to ensure absorption of herbicides.

Glyphosate: Apply a 2% solution of glyphosate and water plus a 0.5% non-ionic surfactant to thoroughly wet all leaves. Use a low pressure and coarse spray pat-tern to reduce spray drift damage to non-target species. Glyphosate is a non-selective systemic herbicide that may kill non-target, partially-sprayed plants.

Triclopyr: Apply a 2% solution of triclopyr and water plus a 0.5% non-ionic sur-factant to thoroughly wet all leaves. Use a low pressure and coarse spray pattern to reduce spray drift damage to non-target species. Triclopyr is a selective herbicide for broadleaf species. In areas where desirable grasses are growing under or around autumn olive, triclopyr can be used without non-target damage.

This control method should be considered when treating individual trees or where the presence of desirable species preclude foliar application. Stump treatments can be used as long as the ground is not frozen.

Glyphosate: Horizontally cut stems at or near ground level. Immediately apply a 50% solution of glyphosate and water to the cut stump, covering the outer 20% of the stump.

Triclopyr: Horizontally cut stems at or near ground level. Immediately apply a 50% solution of triclopyr and water to the cut stump, covering the outer 20% of the stump.

This method is effective throughout the year as long as the ground is not frozen. Apply a mixture of 25% triclopyr and 75% horticultural oil to the basal parts of the tree to a height of 30-38 cm (12-15 in) from the ground. Thorough wetting is necessary for good control; spray until run-off is noticeable at the ground line.