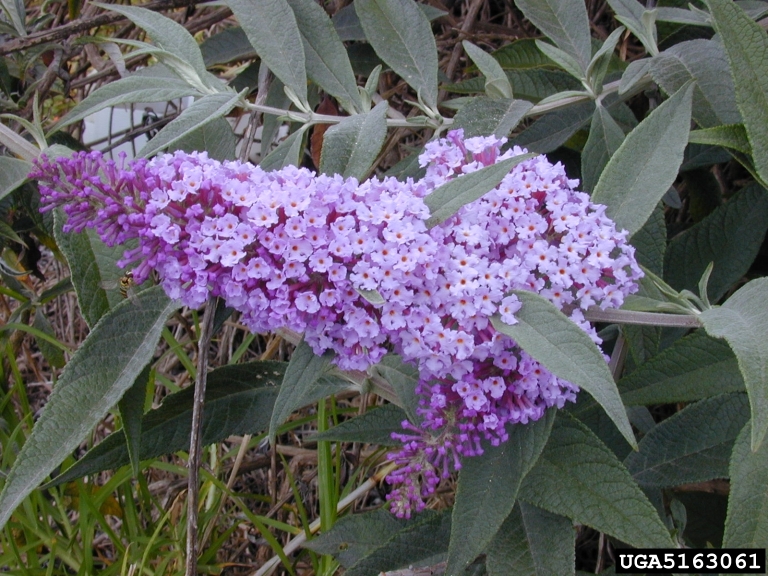 A non-native, deciduous to semi-evergreen shrub that grows 6 to 16 feet tall and 4 to 15 feet wide. Present are long, arching stems that are green when young and have peeling, gray-brown bark when older.

The deciduous leaves are opposite leaves egg- to lance-shaped, up to 10 inches long, green above and grayish, soft-woolly below, growing oppositely.

Tiny, tubular, four-petaled flowers are arranged in large, dense, cone-shaped panicles 3 to 18 inches long that bloom from late spring to first frost in fall. Flowers are generally purplish with a yellow to orange throat, though horticultural varieties range from white or yellow to pink and deep purple. Blooming period is from July to October.

Buddleja, commonly known as Butterfly Bush, is a shade-intolerant woody shrub from China that produces small wind-dispersed seeds. Dispersing 3 million seeds per plant annually, it grows in dense colonies in disturbed sites and riparian areas in oceanic, Mediterranean and continental climates. Buddleja is a member of the Buddlejaceae family. It is cultivated for ornamental purposes because of the fragrant, attractive flowers that produce rich nectar and attract butterflies. The dense infestations compete with native vegetation of riparian areas and impede the growth and reproduction of tree and shrub species in woodlands and in disturbed habitats.

This fast growing and rapidly colonizing shrub spreads from wind dispersed seeds. The infestations of Buddleja can be found in natural forests, riparian zones especially river banks, disturbed areas such as railroads, roadsides, and waste places, wetlands, and open cliffs. After seeding, plants can colonize in one to two years. A shrub can flower and fruit in the first year and will grow up to 2 meters the first year after being cut from the base. Seeds can remain dormant for 3 to 5 years.

Buddleja is native to the mountainous zones of China. It has naturalized in Australia, New Zealand, Western Europe, and the United States (including Hawaii), It is adapted to oceanic, Mediterranean and continental climates. Other states where it is considered invasive: CA, MI, IL, KY, TN, GA, SC, NC, VA, WV, MD, PA, NJ, NY, CT, and MA. State listed as a noxious weed in OR and WA.

There are over a hundred Buddleja varieties or hybrids that are widely available from commercial sources. As of September 2011, the following sterile varieties were approved for sale and propagation in Oregon: Buddleja 'Asian Moon', 'Purple Haze', and 'Ice Chip' (formerly 'White Icing'); FLUTTERBY GRANDÃ‰â„¢ Blueberry Cobbler Nectar Bush, Peach Cobbler Nectar Bush, Sweet Marmalade Nectar Bush, Tangerine Dream Nectar Bush, and Vanilla Nectar Bush; FLUTTERBY PETITEâ„¢ Snow White Nectar Bush; and FLUTTERBYâ„¢ Pink Nectar Bush. The following hybrids (between two or more Buddleja species) are not regulated in Oregon, and are assumed to be sterile, though their fertility has not been assessed: Buddleja 'Lilac Chip', 'Blue Chip', 'Miss Molly' and 'Miss Ruby'.

Seedlings and small plants can be hand-picked or dug out, though this soil disturbance can also create sites for further invasion. Cut branches must be disposed of properly (burned or composted) to ensure they donâ€™t sprout into new plants. Alternately, infested areas can be fenced and browsed by goats for 3 to 4 years to attain acceptable control as part of an integrated pest management program.

To remove established shrubs, stems should be cut off at the base and disposed of properly, and then a general use herbicide such as glyphosate or triclopyr can be applied to the freshly-cut stump to prevent regrowth.

Two biological control agents are being used on an experimental basis in New Zealand, but have not yet been tested or approved for use in the US: the weevil Cleopus japonicas, whose adults and larvae consume Butterfly Bush leaves, and the stem boring beetle, Mecyslobus erro.