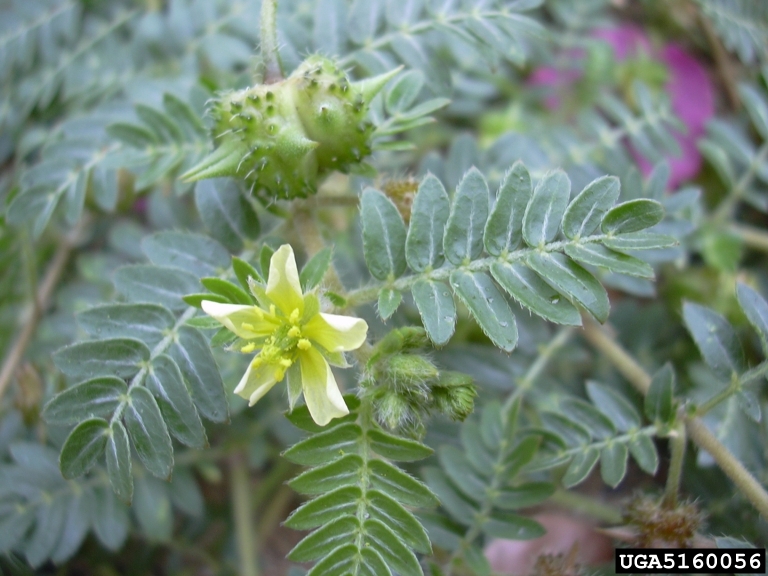 Puncturevine is an annual (sometimes perennial in warm climates) herb with a long, slender, branched tap-root. The greenish-red stems are up to 2 m long, branched, radiating from a central axis and covered with fine hairs. Though usually prostrate, the stems become more erect in shade or when competing with other plants.

Leaves, 3-7 cm long, are in opposite pairs with one of the pair slightly smaller than the other. Each leaf consists of three to eight pairs of opposite, oblong-lanceolate leaflets, each leaflet being 5 to 15 mm long and 3 to 5 mm wide. The upper surface of the leaflets is darker than the underside.

The flowers are yellow, five-petalled, 7 to 15 mm in diameter, solitary and borne on short stalks in the axils of the smaller of each pair of leaves; they open in the morning and close or shed their petals in the afternoon.

The fruit is a woody burr, approximately 1 cm in diameter, which splits into 4 or 5 wedge-shaped segments (carpels), each with 2 unequal pairs of spines and containing 1 to 4 seeds. Seeds are yellow, variable in shape but more or less ovoid and 2 to 5 mm long.

In India, T. terrestris is used in folk medicine as a tonic and diuretic, and for the treatment of painful urination, calculous affections and Bright's disease. Leaves are rich in calcium but poor in iron, providing a cheap supplement to rice diets (Ambusta, 1986). There are indications that T. terrestris may have potential as a treatment for urinary stones (Al Ali et al., 2003), Parkinson's disease (Badmaev, 2002), malignant melanoma (Bedir and Khan, 2000), liver and eye diseases (Li et al., 1998) and benign prostatic hyperplasia (Lokesh et al., 2001). There is some evidence that T. terrestris can improve male sexual function (Gauthaman et al., 2002) and the performance of athletes (Krcik, 2001). Care should be exercised in the use of T. terrestris because it contains poisons that can harm man. Comprehensive details of the medicinal value of T. terrestris are reviewed by Ross (2001).

Puncturevine occurs on almost any soil type but grows best in dry, loose, sandy soils and prospers near sand dunes or loose blown soil around field margins. It also grows in heavier soils, especially when these are fertile or moist, and on compacted soils such as those found along roadsides.

A primary objective of control is to prevent the production of seeds, which can remain viable in the soil for 3 to 6 years, and fruits (burrs) which injure man and livestock. Because the seeds germinate irregularly throughout the year and because the plants can flower and set seeds in such a short time, single or infrequent cultivations are not sufficient to reduce seed populations. T. terrestris has a taproot, so that shallow cultivation may be the most effective means of cultural control. Deep ploughing appears to have little advantage because the seeds are long-lived in the soil, especially when buried at depth. If fruits have formed, plants should be cut so that seeds cannot ripen (Holm et al., 1977).

'Prickle rollers' covered with carpet have been developed to gather and remove surface fruit from drying greens in vineyards (Parsons and Cuthbertson, 1992).

Soil solarization, using thin transparent polyethylene mulches for a period of 3 to 6 weeks, causes a considerable decline in the number of plants and dry weight of T. terrestris (Anju and Gaur, 1998).

Competition from perennial species or annual cover crops reduces the establishment and growth of T. terrestris but it is difficult to achieve on the sites most frequently infested (Parsons and Cuthbertson, 1992).

In Australia, ametryn is the most widely used herbicide; it is non-selective but can be used with care in built-up areas. A mixture of amitrole-T and 2,4-D is recommended for non-selective control in Western Australia. Picloram, glyphosate, linuron, 2,4-D and chlorsulfuron are also effective, and a wide range of herbicides are available for controlling T. terrestris in specific crops or situations, for example: bromacil in citrus; chlorthal dimethyl in a number of vegetable crops, cotton and lucerne; dicamba or picloram in sorghum and maize; dicamba in conservation tillage; metolachlor and flumetsulam in maize; MSMA or trifluralin in cotton; oryzalin in fruit trees; paraquat on fallows; 2,4-DB or acifluorfen in groundnuts; diquat, glyphosate, ammonium glufosinate, paraquat, terbumeton and terbuthylazine in vineyards, and trifluralin in many vegetable crops. All herbicides are more effective on seedlings than on mature plants (Parsons and Cuthbertson, 1992). Imazethapyr and imazaquin give almost complete control when applied pre-emergence or early post-emergence to T. terrestris (Johnson and Talbert, 1993). Bentazone is an effective herbicide in peas (Johnson and Talbert, 1989). Excellent control of T. terrestris in sugarcane has been obtained with fluroxypyr in Australia (Webb and Feez, 1987). Oxadiazon has controlled T. terrestris in pigeonpea in India (Brar et al., 1990).

Biological control has proved feasible in the USA. A stem weevil (Microlarinus lypriformis) and a seed (or fruit) weevil (M. larenyii) were introduced into North America from Italy in 1961. After rapid establishment, they gave good control of T. terrestris in California and Arizona but they are killed by very cold conditions, as happened in Arizona in 1978, and by parasites and predators, especially those feeding on the eggs (Goeden and Kirkland, 1981; Julien, 1992). In Hawaii, USA the weevils destroyed 75% of the seeds and all plant growth within a year of being established on the island of Kauai (Nakao, 1966). There are good prospects for control of T. terrestris in other countries where the weevils are released. In Australia, the seeds of T. terrestris are sometimes attacked by the larvae of a small native moth, Aristotelia sp., but, although damage may be considerable on a local basis, there is no real control overall (Parsons and Cuthbertson, 1992).